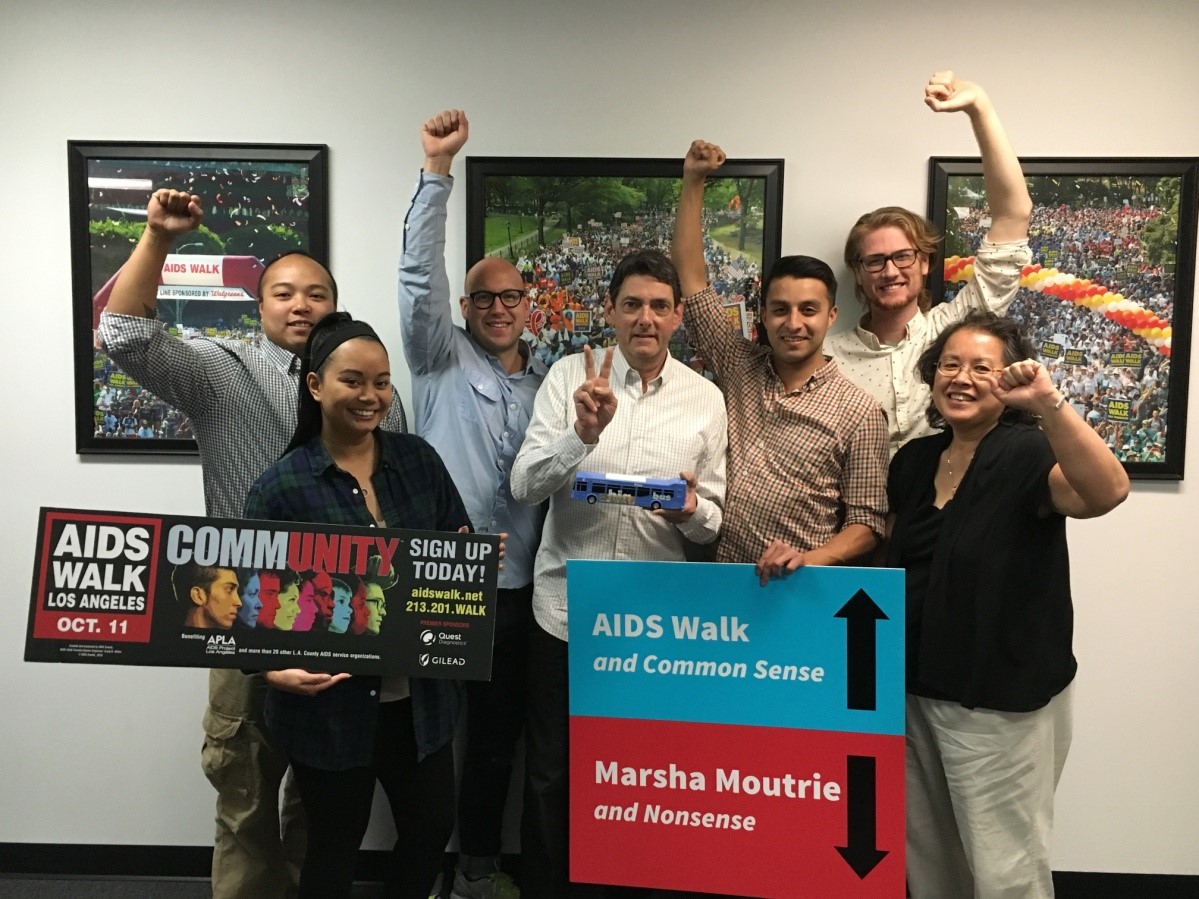 The coalition was led by Craig Miller, AIDS Walk Los Angeles founder and 32-year Santa Monica resident, and included Lisa Brisse, operator of State of the Heart, a popular health and fitness company in the city, Paloma Bennett, a film and television scholar who runs the widely read feminist film blog MAE and who graduated from Santa Monica High (class of 2011), and Andrew Nasatir, a 28-year resident of the city and AIDS Walk volunteer. Their primary legal counsel was Alan C. Bail, also a longtime AIDS Walk volunteer who lives just outside the beachside city in nearby Mar Vista.

“I want to thank the Santa Monica activists who have fought the good fight and ultimately prevailed on this issue of such significance to APLA and the thousands of people we serve,” said Craig E. Thompson, CEO of APLA and APLA Health & Wellness. “This public policy victory on behalf of APLA will also benefit many other important nonprofit organizations and causes whose paid, public service-oriented ads, like ours for AIDS Walk, never should have been banned by that City’s government in the first place,” Thompson added.

AIDS Walk ads, having run on Big Blue Bus from 2006 through 2011, were banned beginning in 2012, along with most other ads for nonprofit organizations. This was due to an existing policy barring “non-commercial” messages from the Big Blue Bus that Santa Monica City Attorney Marsha Moutrie began applying to AIDS Walk and other charitable causes without approval from the city’s elected representatives.  In September of that year, a resident coalition brought the issue to the Santa Monica City Council. The council then directed the city attorney to develop alternatives that might enable the ads to run once again, while still preserving reasonable restrictions on content, such as prohibitions on pornographic images, obscene language, and tobacco and alcohol products.

After nearly four years and several attempts by the coalition to advance a fairer policy, including their filing of a lawsuit endorsed by APLA, the city attorney’s office two weeks ago released a report that included an option modeled after the bus advertising policy in Seattle, WA—what is known as the “King County” model. This set of regulations adheres to a principle that Miller has long advocated. Namely, it calls for equal access for all advertisers and equal restrictions on all advertisers.  The King County model was upheld by the 9th Circuit Court of Appeals on two occasions last year.

At the Council meeting, APLA’s Director of Government Affairs Phil Curtis was the first to speak on behalf of policy reform. “I’m delighted that the Council has chosen an option that allows APLA to once again promote AIDS Walk Los Angeles, as well as other initiatives to educate a broader audience in Santa Monica and the surrounding communities about the care, treatment, and services we offer,” Curtis said.

AIDS Walk Los Angeles Event Director Ben Fordham walked the council through a slide presentation that pointed out the undesirable outcomes resulting from the city attorney’s approach. He demonstrated, for instance, that while ads glorifying gun violence in the context of motion picture or television ads were commonplace on the buses, ads promoting gun safety, such as the “Lock it Up” campaign now running on buses in the neighboring City of Los Angeles, would be denied.

“I know I chant this with you, not at you,” Miller said to supportive Mayor Tony Vasquez who, Miller added, “never backed away from efforts to bring this matter to a positive conclusion,” as well as to the other councilmembers on the dais, emphatically repeating: “Silence equals death; silence equals death. In matters of public health, silence, so tragically often, equals death!”

While it took nearly four years to get the city’s government to act, with just one vote, which was unanimous, overnight Santa Monica went from being among the cities with the most restrictive bus advertising policies, to now embracing one of the more inclusive policies in the nation. This summer, AIDS Walk Los Angeles will once again be featured on the sides of Big Blue Buses as they embark on routes through the streets of Santa Monica and throughout the city of Los Angeles. “These reforms will help us a great deal in engaging the public in the 2016 AIDS Walk Los Angeles,” Miller said.

The Santa Monica Council hearing on this matter can be viewed in its entirety at http://santamonica.granicus.com/MediaPlayer.php?view_id=2&clip_id=3648 (scroll and select item 8B).